My latest book is something of a departure for me. It's not about scams or crooks or finance. It's about the struggle for America's soul.

That's the subtitle of AYN RAND NATION, which was published by St. Martin's Press on February 28, 2012.

AYN RAND NATION explores the pervasive influence of the Russian-born author of Atlas Shrugged and The Fountainhead. She has long been dismissed by the intelligentsia as a fringe character. Don't you believe it.

Her ideology, Objectivism, has been adopted in large measure by a wide swath of America's opinion leaders, and to a large extent by virtually all of the Republican presidential candidates.

Rand provides the ideological underpinnings for the effort to cut or destroy Social Security, Medicare and Medicaid, and to drastically shrink the role of government.

She wrote the recipe for deregulation.

Love her or despise her, Rand is a pervasive influence in the national dialogue. To understand the ideological basis for that dialogue, and to comprehend the mindset that led to the 2008 financial crisis, it's essential to understand Ayn Rand.

That is the purpose of AYN RAND NATION.

Through the stories of people influenced by Rand, from the Tea Party to members of her inner circle to Alan Greenspan, this book explores how Ayn Rand became a pervasive influence on the American right.

AYN RAND NATION explores why Rand matters — and why her ideology needs to be engaged, not ignored.

The Introduction to AYN RAND NATION can be read at my Macmillan author page.

"A scrupulous and sobering investigation, vital for our times." -- Kirkus Reviews

“Ayn Rand Nation is a fascinating exploration of one of the fastest growing and most powerful coalitions in the modern conservative movement. With an unerring eye for detail, Gary Weiss embarks on a journey of discovery that examines the emerging influence of the Tea Party and other political groups that proclaim themselves to be the intellectual progeny of Rand, a crotchety, stubborn and proud purveyor of a philosophy of selfishness. Weiss explores this emerging cultural phenomenon with the even-handed and objective techniques of a sociologist, revealing that these activists are no unified bloc of believers, but are divided between absolutists dedicated to scholarly study of Rand, and fly-by-night devotees who pick-and-choose portions of Rand’s beliefs to create a false philosophical underpinning for their own political convictions. If you want to understand the men and women whose vehement voices are reshaping American government, you must read this book.” --Kurt Eichenwald, New York Times bestselling author of The Informant and Conspiracy of Fools

“The timing of this book couldn’t be better for Americans who are trying to understand where in the hell the far-out right's anti-worker, anti-egalitarian extremism is coming from. AYN RAND NATION introduces us to the Godmother of such tea party craziness as destroying Social Security and elimination Wall Street regulation. Weiss writes with perception and wit."--Jim Hightower, best selling author, newspaper and radio commentator and editor of the Hightower Lowdown

"Gary Weiss brings his skeptical bent and sharp writing to a character who has inspired both fanatical belief and deep derision for decades: Ayn Rand. The book is a compelling journey of discovery about a woman who continues to exert a powerful hold over our society. Weiss shows how Rand is ultimately quite a bit more complicated than either her fans or her detractors would have it."--Bethany McLean, best-selling author of The Smartest Guys in the Room and All the Devils are Here.

"[The book's] arguments, gleaned from two decades worth of reporting on Wall Street, are sure to provoke outrage in many sectors."

So said The New York Post in the first advance review of Wall Street Versus America on Jan. 22, 2006 -- three months before the book appeared.

The Post's prediction proved to be correct.

Wall Street Versus America is a wide-ranging, muckraking account of how the America's investment portfolios are systematically drained by the securities industry, mutual funds, hedge funds and a host of others. It describes how regulators and the press have been ineffective and, sometimes, complicit.

In the months since this book was published, the critical acclaim has been overwhelming. The reaction of the Wall Street crowd, however, has been anything but favorable. Sure, some people on the Street liked the book -- the trade magazine Registered Rep gave it a surprisingly glowing review. But even before the book appeared, just on the basis of media reports, the lower echelons of the Street started getting hives.

In the weeks that followed publication of this book, I received more threats than I did in my previous twenty years covering Wall Street, even when I exposed Mafia infiltration of brokerages.

This is not another "Wall Street Scandals" book.

I don't spend very much time on Enron. I'm not interested in the IPO scandals or other headlines from yesterday's news.

I'm interested in the scandals you're not reading about.

You can't predict the markets. But you can predict Wall Street. This book shows you how to do that.

This book is your guide to Wall Street. Read it and you will never be ripped off.

This book describes in detail the sharks that endanger your investments. It sets forth the simple steps that you can take to protect yourself and your family, and to give your portfolio all the benefits of the stock market without any of its traps and pitfalls.

However you decide to invest -- by picking stocks or putting money in a mutual fund or hedge fund -- you'll learn all the things that Wall Street would prefer you not know.

Click here to order a copy of the book.

Some shameless self promotion....

Here's what the critics are saying about Wall Street Versus America:

"With lethal intent, Weiss' new book unleashes a nuclear blast across the spectrum of financial finagling. From crook-infested microcaps and offshore boiler room pump- and-dumpsters to performance-inflating mutual funds and fee-saturated hedge funds, the misdeeds of both the blackguard contingent and the white-shoe set come under his microscopic scrutiny and macroscopic scorn.

"Gary Weiss is definitely not a goody-two-shoes; he's more of an old-time gumshoe, with a soupcon of little-guy champion Jimmy Breslin and a dash of 1950s bad-boy comic Lenny Bruce. . . .

"For those individuals not yet savvy enough to avoid getting bruised by what Wall Street Versus America's subtitle proclaims as The Rampant Greed and Dishonesty That Imperil Your Investments, Weiss' book could provide years of happier returns.

"Gary Weiss has written a book that strips away the gloss and glamour of the stock world and reveals the sometimes sordid details.

"Wall Street Versus America is erudite and savagely funny.

"Weiss, an investigative reporter, doesn't hesitate to present the story with bite, and it's one heck of a bite. Between laughs, readers may be astounded at Weiss's sheer audacity and also appreciate the facts. . .

"Weiss does not mince words. He digs deep to provide scandalous commentary on the investment business.

"The book is informative and entertaining, a must-read for those venturing out into the investment jungle."

"Like anything having to do with finance, "Wall Street Versus America" has a bottom line. It asks the reader to consider how seldom investors' behavior makes sense, how minimal an impact regulations usually have (though he notes the recent efforts of New York State Attorney General Eliot Spitzer), and how effectively the Internet could be used to alter the way financial institutions work. Surely these are claims that can provoke arguments. Maybe they're also claims that can provoke change."

"Before signing on the dotted line for your next brokerage account, take a few minutes to read at least the introduction and epilogue to . . . Wall Street Versus America. . . You will see just how alone you truly are."

I've started a blog in which I'm writing about the issues that I tackle in Wall Street Versus America.

In July 2005, I was proud to join a group of investigative journalists in forming Project Klebnikov, which will investigate the murder of Paul Klebnikov in Moscow on July 9, 2004. Paul was editor of the Russian edition of Forbes magazine.

While you're waiting for your copy of Wall Street Versus America, why not take a look at my last book?

Born to Steal: When the Mafia Hit Wall Street is the critically acclaimed inside story of how investors were ripped off by Mob-affiliated stock scamsters throughout the 1990s.

I've posted excerpts from the book, illustrated with photographs, on this website. I've also described the fracas that broke out when the book was published. Some prosecutors were mighty upset when Born to Steal was published. This is a story they wanted all to themselves.

Just click on "The Mob" in the menu at the top of this page, and read all about it.

If you really like what you see, I can share my years of experience covering the Street with your organization or company.

I've given talks to a wide array of corporate and collegiate audiences. I've even been asked to speak before some of the regulators I criticize in the book. 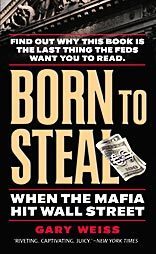 Subscribe to RSS headline updates from:
Powered by FeedBurner


“Written in wry and witty prose . . . it's ‘Goodfellas on Wall Street,’ a fascinating study of the disintegration of a bottom-feeder.”

"A wickedly entertaining look at the really dark side of Wall Street. . .

"Weiss' writing is electric. He vividly demonstrates how the mob's infiltration of Wall Street was a diabolically perfect fit. The journey of Louis Pasciuto is one you'll not soon forget."


"A harrowing and instructive ride."


"Told with insight and great wit, grips as tightly as a loan shark."


"Engrossing. . . this story clearly illustrates that truth is better than fiction."


”James Stewart reporting melded with a Mario Puzo arrative, its pages revealing one of the most riveting stories of the past two decades. . .

"Gary Weiss has done the impossible--written a business book that reads like a Scott Turow thriller."


“An instructive and hilarious portrait of the twisted contemporary convergence of business, entertainment and crime. It is thoroughly engaging and original-–a legitimate contribution to the history of our times.”

--James Toback, screenwriter of the Academy-Award winning “Bugsy” and director of “The Pick-up Artist”


"Few authors have captured the dark side of American capitalism as entertainingly as Weiss.

"Born to Steal is a knockout."

--T.J. English, author of The Westies and Born to Kill


“Takes the reader to where it really gets nasty: the weird lunar landscape that is the truly dark side of Wall Street where crook steals from crook and the books are sometimes kept in blood, where the financial werewolves dwell, where ‘The Godfather’ meets the 21st Century. Terrific stuff!”


“Move over Tony Soprano! Louis Pasciuto dominated the Mob’s hold on Wall Street the way Tony dominates Jersey’s waste business. Gary Weiss, long one of the toughest reporters covering the market’s seamy side, takes you inside Pasciuto’s world in a story that is a cross between ‘The Sopranos’ and the movie ‘Wall Street.’

"You won’t know whether to laugh or cry at the machinations of this professional Wall Street con man. But you’ll be entertained either way.”

--John Rothchild, co-author of One Up on Wall Street